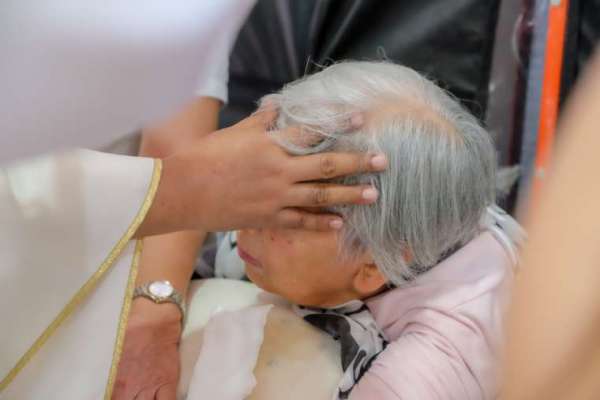 Denver Newsroom, May 13, 2020 / 05:42 pm (CNA).- The Archdiocese of Saint Paul and Minneapolis has assembled a team of 30 priests ready to administer last rites— confession, communion, and anointing of the sick— to COVID-19 patients.

All the priest-volunteers on the “Anointing Corps,” which launched early this month, are under 50, and most are parochial vicars. The team has anointed at least a dozen patients so far, the archdiocese said May 12.

Auxiliary Bishop Andrew Cozzens, who is spearheading the initiative, told CNA that priests from the Anointing Corps have been called to several nursing homes already.

"The nursing homes, I think, have just been happy that we're handling it professionally," Cozzens said.

On some occasions, he said, the anointing priest has been able to "live-stream" the anointing of the sick person to their family outside the nursing home, since they are not able to be there in person.

The Archdiocese of Chicago in early April assembled a team of 24 priest volunteers— all under age 60, and without pre-existing medical conditions— to administer anointing of the sick to Catholics with COVID-19 during the coronavirus pandemic.

Cozzens said he looked to Chicago for guidance on how to assemble their own team.

The key for the St. Paul and Minneapolis “Anointing Corps”, he said, has been their training and professionalism. In addition to the priests, their archdiocesan team has triage nurses working on it, he said— people who know how to communicate effectively with hospital staff.

"We haven't been able to get into every nursing home— nor every hospital— because of the protocols, but we've been making a lot of progress," Cozzens said.

The priests on the team have received the same personal protective equipment training as the doctors and nurses, he said.

"The key for us has been convincing the hospitals and nursing homes that we have a really good protocol, and that our priests are trained and know what they're doing."

Several of the hospitals and nursing homes where priests have performed anointing, Cozzens said, have been especially welcoming of and grateful for the priests' ministry.

Most care centers have been helpful in providing the PPE that the priests need in order safely to  enter the room and physically touch the patient when anointing them.

Cozzens encouraged other local Churches wanting to create their own anointing teams to consult with medical experts and make sure the priests are well trained in what they are being asked to do.

"Having a professional and consistent approach has been the key to hospitals letting us in," he said.

Father Joseph Gifford, associate pastor of Church of All Saints in Lakeville typically serves as a nursing home chaplain.

His ministry as a chaplain normally would consist of celebrating Mass for the Catholic residents at four or five area nursing homes once or twice a month. In addition, Father Gifford would normally often be called to hear confessions and administer the anointing of the sick to residents.

Father Gifford said he is glad that it is he— as All Saints' parochial vicar— who is tasked with anointing COVID-positive patients, and not his pastor.

"That way, my pastor can see the non-COVID-19 patients who are still in danger of death for all the other reasons," he said.

"In my short experience as a priest, I can always look forward to going and saying Mass at the nursing home, and it's going to be the same people," adding that he looks forward to "getting to know them better, and share life and share God with them."

Father Gifford was a trained singer before he entered the seminary, and told CNA he has used his gift of singing to entertain residents at the nursing homes he serves at by singing to them outside their windows.

In addition, since no one currently can visit the area nursing homes in person, All Saints parish has set up a "calling tree" of staff members and volunteers in order to regularly check on parishioners over 65.

The archdiocese has also set up a site where Catholics can commit to daily prayer for health care workers.

The Archdiocese of Boston also has assembled anointing teams of priests. In that local Church, the priests are housed together in strategic locations close to hospitals.

Throughout the country, chaplains at hospitals and nursing homes have had to adapt their ministry to protect the elderly and those at greatest risk of contracting COVID-19.

Father Hugh Vincent Dyer, a Dominican priest in New York, took up residence in the nursing home where he has served as chaplain since December 2019. There are about 360 elderly residents at the nursing home, not all of them Catholic, the Federalist reports.

To continue to minister while keeping his distance, Father Dyer has been broadcasting Mass, the rosary, and meditations from the facility’s chapel via closed-circuit television.

He also has been using the CCTV system to screen films, some of which he has found “can trigger forgotten memories and fascinating stories.”

In addition, he has been broadcasting a weekly “Cultural Miscellany,” during which he reads poetry— some of which are favorites that the residents have specifically requested— and offers reflections on them.

Consecration to St. Joseph: The Wonders of Our Spiritual Father

(17)
$9.95 (as of February 24, 2020 - More infoProduct prices and availability are accurate as of the date/time indicated and are subject to change. Any price and availability information displayed on [relevant Amazon Site(s), as applicable] at the time of purchase will apply to the purchase of this product.)

(68)
$10.99 (as of February 24, 2020 - More infoProduct prices and availability are accurate as of the date/time indicated and are subject to change. Any price and availability information displayed on [relevant Amazon Site(s), as applicable] at the time of purchase will apply to the purchase of this product.)