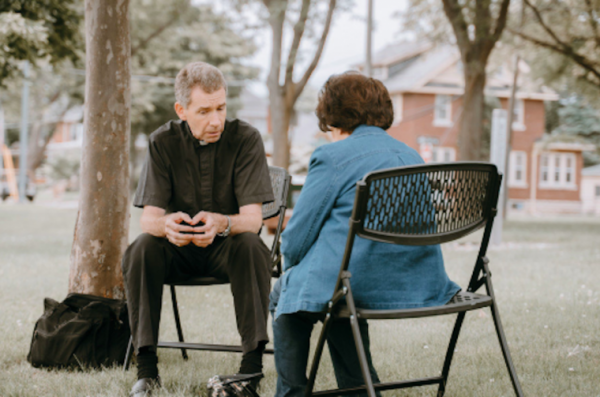 Washington D.C., Mar 18, 2020 / 04:35 pm (CNA).- As much of the world faces quarantines, social distancing, and “shelter in place” orders amid the coronavirus pandemic, Catholics have faced unexpected challenges in accessing – and offering – the sacraments of the Church.

Catholics in some places impacted by the pandemic have learned that the sacrament of confession – the remedy for sin and a conduit of God’s mercy – has become rather difficult to find.

The sacrament of penance requires a number of practical conditions. The penitent must make a manifestation of sins to a priest acting in the person of Christ, express true contrition and resolve to sin no more. It also requires the conferral of absolution – forgiveness, from the priest, according to the sacramental formula of the Church. And a valid sacramental confession requires that all of those things happen in one place, the Church has long taught.

But as the pandemic continues, and social prohibitions grow stricter, some Catholics are wondering why they can’t confess their sins virtually – over the phone, via text, or on Skype.

Father James Bradley, assistant professor of canon law at The Catholic University of America, told CNA that the coronavirus epidemic had created a new kind of pastoral urgency which many bishops and priests are trying to meet.

He told CNA on Wednesday that “the pastoral needs of the faithful,” have to be met “especially in this extraordinary time,” and that pastors are seeking new approaches to deliver spiritual care, including the sacraments.

“Canon law is clear: the faithful have a right to the sacraments, and the Church’s ministers should do all they can to provide them.”

Bradley noted the importance of online resources for Catholics. But he cautioned that innovation in ministry must be coupled with an understanding and respect for the nature of the sacraments.

“Digital communications can and do assist people in deepening their faith, especially through catechesis and formation,” he said. “We see wonderful examples of the internet as a tool for evangelization. We can appreciate this all the more in the present crisis, with dioceses and parishes encouraging and supporting their people through online ministries.”

“The Pontifical Council for Social Communications puts it clearly: ‘Virtual reality is no substitute for the Real Presence of Christ in the Eucharist, the sacramental reality of the other sacraments, and shared worship in a flesh-and-blood human community. There are no sacraments on the Internet; and even the religious experiences possible there by the grace of God are insufficient apart from real-world interaction with other persons of faith.’”

Bradley told CNA that there are limits to what can be done online.

“Some laws regarding the sacraments are flexible, for instance the norm of hearing confessions in a church or oratory. Others are not, for instance that absolution requires a validly ordained priest,” he said.

Father Giorgio Giovanelli, a professor of canon law at Rome’s Pontifical Lateran University, told Catholic News Service this week that he believes confession could take place over the phone, if  Pope Francis would extend his permission.

“Some would object that the priest must be present. OK. That’s the kind of thing people would say in the 1980s, but the development of technology has allowed us to have other kinds of presence,” the priest told Catholic News Service.

“Am I less present by telephone? Virtual presence is real. Who could say that the celebrative dimension of the sacrament in these very particular, narrowly defined situations is lacking?” he asked.

But Bradley told CNA that innovative approaches to ministry have to be grounded in the Church’s teaching. Underpinning canon law, he said, is the essential theology of the sacraments, often rooted in a necessary person-to-person encounter.

“The nature of confession, like all the sacraments, involves a personal and ecclesial encounter with Jesus Christ, who is the Word made Flesh. A virtual reality can never replace the reality of the incarnation. We can deepen our faith through watching a livestream of Mass, but we all know: it’s not the same as being physically present.”

The canon lawyer also noted secondary concerns which should be considered when discussing new or adapted forms of sacramental ministry.

“There are also practical issues that relate to the nature of the sacrament of confession. A telephone call or online meeting raises serious concerns about privacy, anonymity, and safeguarding,” Bradley said.

Fr. Thomas Weinandy, OFM Cap, a member of the Vatican’s International Theological Commission, told CNA that “physical presence is absolutely for the validity of the enactment of the sacrament.”

“The reason I say that is because the sacrament is the action of Christ performed by the minister, and for that action to take place, the priest and the penitent must be in communion with one another, in a physical manner.”

“You can’t baptize someone who’s not actually present, you can’t participate in the sacrifice of the Mass — a priest can’t confect the Eucharist— without being physically present,” the theologian added.

Weinandy told CNA that confession is an “interpersonal exchange.” The physical presence of confessor and penitent point to the significance of the Incarnation of Jesus Christ.

“The Incarnation sets the framework for the sacramental order. Sacraments by their very nature, are incarnational signs that effect what they symbolize and symbolize what they effect, and one must be a part of that sign and reality to participate in the sacrament,” he said.

“Even in the Old Testament, Moses had to be in front of the burning bush to know he was in the presence of God,” Weinandy said.

In the 17th century, the Church declared that confession by letter would be invalid. More recently, in 2011, papal spokesman Fr. Federico Lombardi, SJ, responded to the proposition that sacramental confession might one day take place by iPhone app.

"It is essential to understand well that the sacrament of penance requires necessarily the rapport of personal dialogue between penitent and confessor and absolution by the present confessor,” Lombardi said at the time.

One cannot speak in any way of 'confession by iPhone,'” Lombardi added.

(225)
$30.80 (as of August 5, 2020 - More infoProduct prices and availability are accurate as of the date/time indicated and are subject to change. Any price and availability information displayed on [relevant Amazon Site(s), as applicable] at the time of purchase will apply to the purchase of this product.)

(160)
$2.95 (as of August 5, 2020 - More infoProduct prices and availability are accurate as of the date/time indicated and are subject to change. Any price and availability information displayed on [relevant Amazon Site(s), as applicable] at the time of purchase will apply to the purchase of this product.)

(16)
$27.26 (as of August 5, 2020 - More infoProduct prices and availability are accurate as of the date/time indicated and are subject to change. Any price and availability information displayed on [relevant Amazon Site(s), as applicable] at the time of purchase will apply to the purchase of this product.)

Renewing Our Hope: Essays for the New Evangelization

$19.95 (as of August 5, 2020 - More infoProduct prices and availability are accurate as of the date/time indicated and are subject to change. Any price and availability information displayed on [relevant Amazon Site(s), as applicable] at the time of purchase will apply to the purchase of this product.)