Where has September gone? Just yesterday I was sitting out on the deck drinking a glass of wine while the kids played in the back yard. Actually that isn’t true. Yesterday it rained all day.  I drank a glass of wine while I watched the Bears/ Vikings game with Chris. I am a Packer fan so I don’t even know who won that game.

September flew by.  The years seem to go by faster and faster as I get older.  Sometimes I wish I could reverse time and be ten again.  When I was ten all I worried about was getting my homework done and the next time I would be able to play with my friends again. Life was so much simpler. 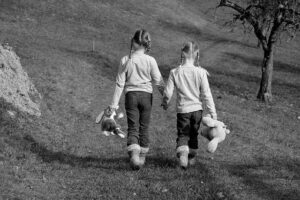 Back in the eighties we didn’t have laptop computers, hundreds of channels on our television, cell phones, or iPads.  In the summer I was allowed to wonder around the neighborhood and go over to a friends house to play.  The neighborhood kids would get together at the park across the street from my house and we would play kickball, softball or kick the can.  We socialized with one another. We had fun. We did not have our heads buried in an electronic device.

Fast forward to 2019.  I am forty-one-years-old. Yikes! Now I worry about how my kids are behaving in school.  Whether or not Kitty is practicing her guitar.  If we are going to have enough money to pay our mortgage and feed the kids.  Who is going to clean the litter box and do the dishes. And how I am going to get the kids to their activities after school.

So far I don’t like my forties.  I am tired all the time. It  doesn’t matter how many hours of sleep I get at night I am still tired.  Maybe my iron is lower than usual.  I have iron deficiency anemia.  I am supposed to take an iron pill every day and get my iron levels checked once a year. When my iron levels are really low I get extremely tired, dizzy and my nails get brittle and crack.  I am also very forgetful and get frequent headaches.  These are all symptoms of iron deficiency anemia.

For the past few months I have been feeling more tired and weak. More than normal.  I stopped running and stopped taking my iron supplements.  Instead I took a nap every afternoon.  Suffering depression after getting all that money stolen from me didn’t help much either.

Today the weather is nice and sunny and we are expecting temperatures in the eighties. So I decided to go for a run.  I had a hard time keeping up the pace and had to stop and walk a few times. I think my iron levels are low.

Getting old sucks. I wear reading glasses now. I am having trouble keeping up with my kids an I can’t run two miles without stopping anymore.  Time is going by faster and faster. Yes, tomorrow is October 1.