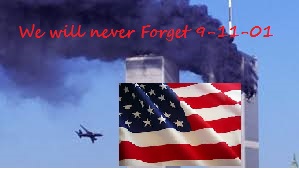 Today is Remembrance day in the United States. It is a day of mourning and never forgetting. On September 11, 2001 terrorists attacked our country with passenger jets. Thousands of people lost their lives.  The terrorists flew into the World Trade Center, the Pentagon and one airplane crashed into a field in Pennsylvania. Just like the generation before me never forgetting where they were when JFK was shot and killed, I will never forget where I was and what I was doing when the events of 9-11 happend.

I was in college at the time. Chris and I had only been dating for a few months. I remember being a poor college student and single mom. I couldn’t afford cable so I watched everything unfold on the Today show on NBC as I was getting ready for work and sending my daughter off to Head Start.

I was in shock when I watched the twin towers tumble. I hugged my daughter, sent her to school, called Chris and called my mom.  I was crying when I climbed into my old chevy to head to work. I worked at a small deli and ice cream shop downtown and was scheduled to open that day. I didn’t have classes until the afternoon.  My boss had the radio on and we listened to the news. He closed the deli early that day.

I went home and had some lunch. Then headed to my afternoon class.  It was a political science class and my professor who we just called Koz, had a daughter that was living in NYC then.  He talked breifly about the events of the day, then ended class early.  I had a history class that evening, but that professor cancelled.  Even though we were miles away in Wisconsin, everyone that I knew was in shock.

I will never forget.  Where were you when the world stopped turning?