May isn’t even half over yet and already it’s been a crazy month at the Talbert Zoo. We have birds living on our house and more birds in a bush less than ten feet from the house.  The weather in Chicago is not very spring like yet, with high temperatures barely reaching above 60 degrees.  We recently learned that Monkey’s medication is only making him behave worse in school. Goose’s new job has changed our regular routine, but for the better. 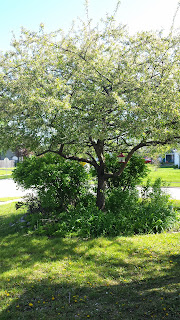 Momma Robin has been sitting on her nest for hours on end. If Chris, or I enter or leave the house she will stay there. However, when she sees the kids then she flies over to a neighboring tree until they are out of sight. I think she trusts adults but isn’t so certain about children.  Children are loud and unpredictable. If I was a bird I think I would fly away if I saw three noisy boys and an excitable little girl too.

I learned that it takes 12-14 days for robin eggs to hatch. My birthday was on Monday and I was hoping that the babies would be born then, but no such luck.  She is still sitting on her nest as I type this.

Momma Robin has a neighbor living in the bush in front of our house.  We call her Momma Mourning Dove. I’ve seen her fly in and out of the bush several times, but her nest is so hidden we aren’t able to see it. Sometimes Momma Mourning Dove will hang out on the ground near the bush. If she sees us she’ll fly to the roof. She is a very protective Momma. Once Goose and I were entering the house and she fluffed her feathers at us as if to say, “Stay away, you are too close to my nest.”

With the birds comes my favorite season of the year, spring.  Spring begins with my favorite holiday, Easter. It is a time for everything to start new. The trees bud, flowers bloom, the kids get anxious about school ending for the year and the weather is supposed to get warmer.  But here in the Midwest the weather is hard to predict. 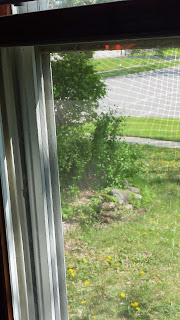 Yesterday we woke to temperatures in the 30’s.  Today it wasn’t much better. By Friday we are supposed to have normal temperatures close to 70 degrees, but there is a catch.  It’s going to rain.  This cold, icky weather is putting a damper on my morning runs.  I usually wake before 6 am so I can go for a 2 mile run. I skipped it altogether yesterday and this morning I jumped on the elliptical instead. Maybe by June it will be warm enough to go for a run wearing shorts.  Right now I am sitting here with jeans, a sweatshirt and a blanket on my lap. So much for spring this year. 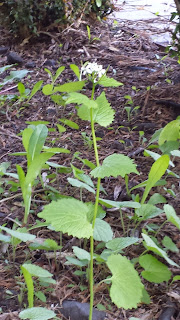 My little Monkey has been on Ritalin for ADHD since March. I noticed an improvement in his behavior at home, but at school he’s been terrible.  This afternoon he has an appointment with the psychiatrist so his teacher typed up a report outlining his behavior at school.

In her report his teacher states, “Over the course of the year, CJ has made great academic progress and is performing with his grade-level peers and is achieving kindergarten expectations. Currently, CJ does not have any academic concerns. The most challenging area for CJ is his classroom functioning and behaviors. Typically, CJ is often out of control and all over the place, such as running in circles around the classroom, jumping off of his chair, shouting, wrestling his peers during a lesson, getting physical with others, etc….. CJ can go from 0 to 60 in seconds and it’s getting harder to redirect and focus his attention. Earlier in the year, CJ seemed to be calmed and more focused, and within the last couple of months CJ’s behavior has become less manageable and more out of control. CJ often needs a stern redirection and even then CJ appears to not hear the teachers’ directions as he is constantly moving and doing or getting into something. ”

She also explained that he is very competitive and if he doesn’t finish his assignment first or win in a game he throws a tantrum. I noticed this behavior at soccer too. Hopefully, the psychiatrist can help. I am at a loss.  I don’t know if this type of behavior is related to ADHD or if there is something else going on. 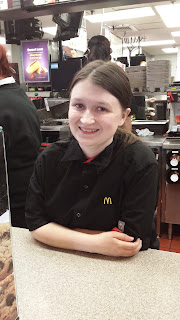 Goose’s graduation is only seventeen days away. I can’t believe that I am old enough to have a child graduate high-school.  She also got a new job at McDonald’s – her first job. Again I am a proud Momma.  Due to her autism, Goose can not handle driving and did not show an interest in getting her license.  She wouldn’t be able to handle driving anyway and I don’t want to endanger her safety. So Chris and I are her transportation to and from work. It is a sacrifice I am willing to make because I love my little girl and want her to have a job.

Chris is at his company’s annual conference in Phoenix this week. Whenever he is away for an extended time my anxiety causes health problems. This morning I woke up with a stomach ache and it quickly turned into diarrhea. I’ve only eaten a banana this morning and don’t feel like eating much more. I need to try to relax and play it low key, but it’s hard for me to do that. Maybe my anxiety came on after I watched the news coverage of the train accident in Philadelphia last night, or maybe it is from reading Monkey’s report from his teacher, or the fact that Chris is away. It is more than likely all three.

I Can't Do Everything
Best After School Activities for Your Child with ADHD
Early Prenatal Anemia May Increase Risk of Autism, ADHD