This is a true story about what went on in the Talbert Zoo over the past four days.  My life as usual was put on hold because of my three-year-old.

Saturday night we got home late from visiting my in-laws in Sacramento for the Fourth of July.  The next day was pretty typical. We went to mass in the morning as a family, got home, and the kids played outside. Chris left that afternoon to train for his new position in Chicago.  After he left, I unpacked from our trip, did a little laundry and checked my e mail and blogs.  I also went for a walk with Little Bear.

He loves to lay down in his stroller and take a nap while mommy power walks. We did that and he snuggled with his favorite blanket, which he has been attached to since birth. 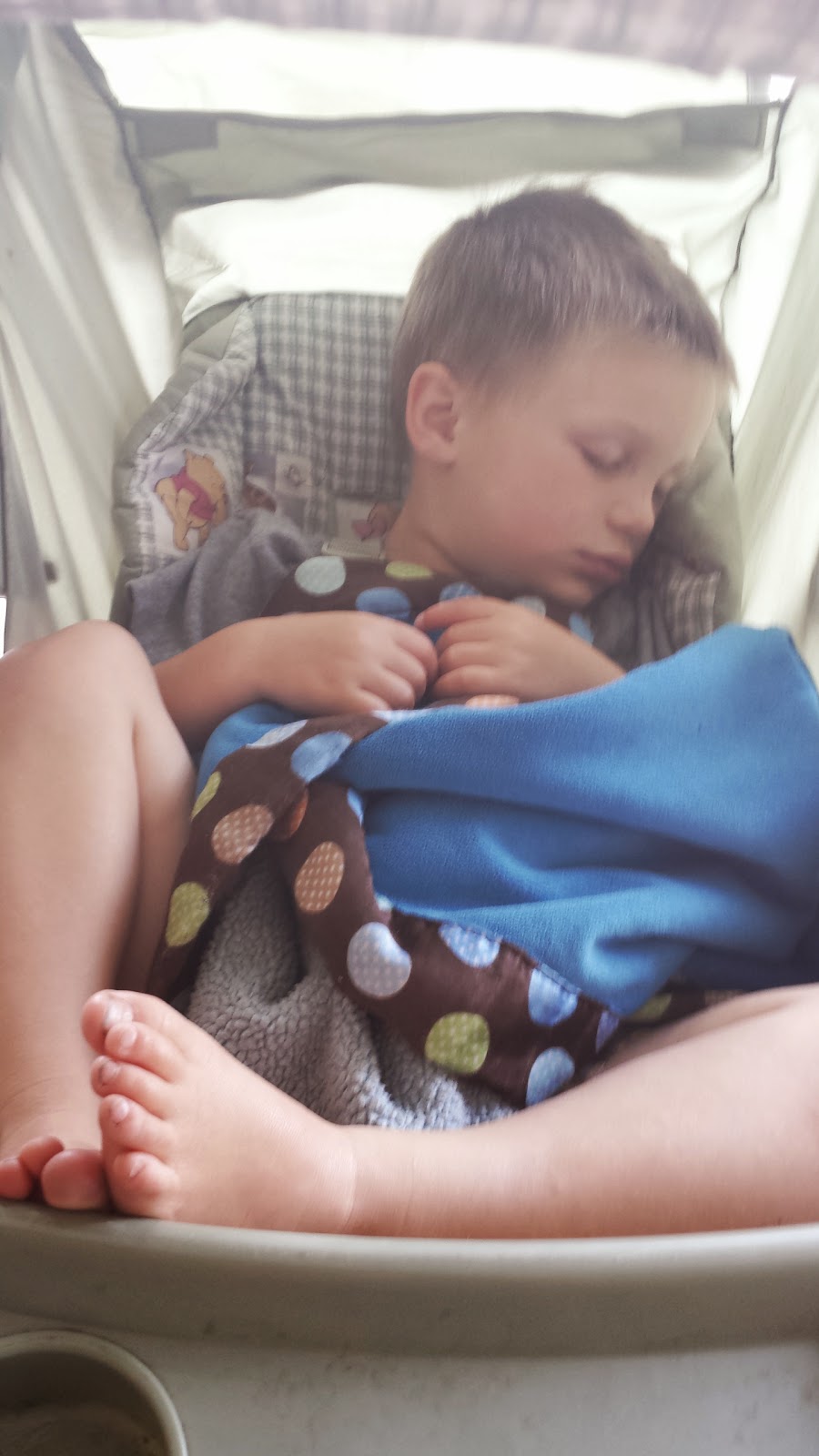 When we got back from our walk and he woke from his nap I folded up his blanket and placed it on our large chair in the living room.  Then I fixed dinner while the kids played outside.
We ate dinner at 6pm and after dinner I worked on my other blog’s template for a couple of hours.  Around 8pm all the kids were inside and got ready for bed.
At 8:30, Little Bear asked for his blanket. I did not know where it was.  After searching the home frantically for about a half an hour Goose and I noticed that there were a bunch of kids running around in our back yard.
Our next door neighbors often have their extended family over and the children run around in the cul de sac, and other people’s yards, including ours.  It really upsets the other neighbors. These kids are probably between the ages of 4 and 10 and are left to run around outside until past midnight during the summer.  It is hard to tell if anyone is watching them, which I find very annoying.  Sunday night they were playing in my yard and making a lot of noise.
Goose, a friend of hers, Kitty and I searched the house for about an hour for Bear’s blanket and could not find it. I asked little Bear if he remembered where he was when he had it last and he said outside.  So we searched outside together. It was getting dark and very difficult to see anything except for the children running around in my yard.  When I couldn’t find the blanket I gave up and we went inside.
Little Bear needs his blanket in order to fall asleep so I was up with him until midnight.  The next day I spent four hours in the morning searching the house from top to bottom for the missing blanket.  I asked the kids if they saw their brother with his blanket and where they saw him with it last. They all said that they didn’t remember seeing him with it outside, but he had it in his bedroom.
I tore through the boys’ room from top to bottom on Monday and Tuesday.  I even opened a couple of boxes that we packed for our move on Sunday, just in case he shoved it in one of them without me noticing. Still no blanket.
I talked to the neighbors around our cul de sac and insisted that it was not in my house. Afterall, 60% of my home is packed up for our big move to Chicago in a couple of weeks.  We are moving and I had to find this blanket. I was at my wits end and ready to do anything to get it back.
Thoughts of what might have happened to the blanket and how I will get it back consumed me night at day. I said the prayer that my mother taught me as a small child when ever we lost something. It goes like this, “Jesus once was lost and found again.”  I was nearly in tears. This morning I went online searching for a blanket just like the one my son lost, with no success.
I went next door three times. Each time I said that I believed that the kids that were running around in my yard took my child’s blanket. The young man next door said he talked to the parents and those kids did not see a blanket.  I also hung up flyers on mailboxes asking anyone if they saw the blanket. With my statement that I believed it was stolen from my yard. He even gave me the phone number for the mother of the children who were playing in our yard on Sunday. I called her and left a message, convinced that her kids were not being honest. After all, they are just kids.  The neighbor agreed with me.
When ever I asked my three-year-old if he remembered what happened to his blanket he said yes to everything I suggested. Of course I am going to believe my child. Who wouldn’t  believe a sweet, little innocent three-year-old boy with sad blue eyes.
Every day he said, “Mommy, I want my blanket. Someone took my blanket. Where is my blanket?”

This afternoon as I was putting away some papers I found the blanket.  Now I am the laughing stock of the neighborhood.  I appear to be a bitch and a liar. I messed up. The blanket was shoved in my desk drawer by the blanket’s owner. He hid it and forgot where he put it.  Five people searched the house on Sunday night but none of us opened that drawer. Just if we had done that, none of this stress and consumed time would have happened.  But, hey, a mother will do anything for her child.

I am so glad that we are moving in two weeks, because the neighbors are not going to be too fond of me after this.  I screwed up. Now I need to apologize to everyone that I got involved, after I call the mother of the kids from Sunday night and rip down all the flyers around the neighborhood.

Your Thoughts are Killing You: Take Control of Your Mind and Close the Door to Those Negative, Depressing, Fearful, Worrisome Thoughts Forever

(134)
$3.99 (as of February 24, 2020 - More infoProduct prices and availability are accurate as of the date/time indicated and are subject to change. Any price and availability information displayed on [relevant Amazon Site(s), as applicable] at the time of purchase will apply to the purchase of this product.)

(3846)
(as of February 24, 2020 - More infoProduct prices and availability are accurate as of the date/time indicated and are subject to change. Any price and availability information displayed on [relevant Amazon Site(s), as applicable] at the time of purchase will apply to the purchase of this product.)