This post is going to be a bit random because I have a lot on my mind today. So bear with me please. It has been a very busy week and this morning I woke up feeling physically and emotionally exhausted. I already know that it is going to be another one of those days.

Parrot woke up at 5am with an earache so that might be why I am tired along with the fact that yesterday was physically draining.  After I got out of the shower this morning I got a call from the school nurse.  She said that Parrot’s ear was red and hurting so I needed to come out and pick him up.  I have less than an hour until I need to go pick up Monkey from school so I may or may not get this post published before I leave.

Monkey went on a field trip to Riverfront Park in Spokane this morning.  The kids got to ride on a city bus, which is something that Monkey has been begging to do for over a year now.  A lot of parents went along on this field trip and I feel so guilty because I wasn’t able to share this special day with him.  Siblings are not recommended to go along on the field trips and I needed to take care of Bear, and now Parrot is home sick too.  I hate having to choose between one kid or the other.  Usually the younger kid gets my attention first.

Tomorrow I have to make another choice between my two daughters.  Kitty has a special performance at school in the morning.  They are putting on a puppet show of The Billy Goats Gruff.  I promised that I would be there.  But Goose has a doctor’s appointment in the morning as well.  I usually take her to those appointments every Friday.  I forgot about the appointment when I signed the slip for Kitty’s performance saying that I was going to that.  Crap!  Chris is coming home this evening so hopefully he can take Goose to her appointment, but then I need to figure out what we are going to do with Monkey and Bear.  Maybe they can go with me.  But then I will be babysitting instead of paying attention to Kitty.  This is why I feel emotionally exhausted.

Hopefully I will have my energy back so I can take care of Chris’ needs when he gets home.  Just thinking about that is making me feel anxious and stressed.  I just want time to myself when he gets home, but I know he is going to need my attention.

Yesterday took the life out of me too.  We finally have beautiful weather so I spent most of the day outside and have a sunburn to prove it. In the morning I blew bubbles with Monkey and Bear.  I tried my best to get a few good photos of them with the bubbles and was fortunate to get this action shot of Monkey. 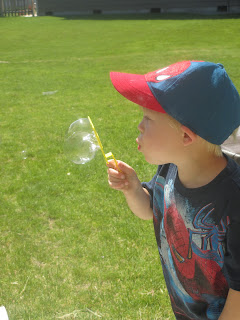 When Bear was taking his nap Monkey got my undivided attention.  I helped him peddle his bike around in the cul de sac, then we played with the t-ball set until he whacked my fingers with the bat.  After applying ice for a few minutes my hand started feeling better.  While I was resting my fingers Monkey told me that he wanted his hair cut so he ran into the house and came back out looking  like this. 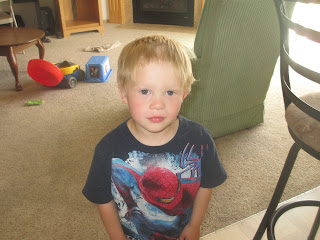 I think every three-year-old kid takes a pair of scissors to their own hair at least once.  I just laughed and got the electric shaver out and fixed it.  My boys are all due for buzz cuts anyway.  I was planning on cutting all three of their hair this weekend.  Monkey just got his a few days earlier. 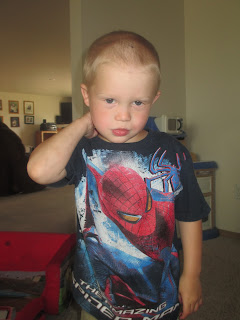 I am also emotionally exhausted because I learned some bad news about my extended family.  My cousin has two young boys.  Recently he just found out that his four-year-old has a cancerous tumor behind his ear. They are waiting for more test results to make sure that the cancer hasn’t spread anywhere else.  On top of that, my aunt, this cousin’s mother has been battling cancer for a long time and she isn’t doing very well either.   My uncle, his dad is my dad’s brother and I just can not imagine what he is going through right now, nor what my cousin and his wife are going through.  Is all I can do for them is pray.  I was planning on saying a complete rosary for them this morning instead of just a decade like I usually do, however since I was up early with Parrot I wasn’t able to read my bible or say the rosary.  When I skip my morning devotions the rest of my day just feels empty and usually I end up having an off day.

I also learned yesterday that Chris’ grandmother who is 88 years old and has been battling Alzheimer’s for about 6 years now has been placed in Hospice care.  She hasn’t been eating or drinking that much and she’s bleeding internally.  When my sister-in-law told me about this she thought that her grandma was going to pass soon.  However, my mother-in-law said that she will probably be able to hang in there for a few more months.  Only time will tell and again I am praying hard for her too.

It is almost time for me to go and pick up Monkey so I guess I will end this rant.  Thank you for taking the time to read this.