A lot has happened this week and I wish I could write about everything, but in order to fit it all in one post I am going to just summarize. 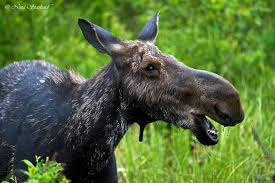 On Tuesday morning Monkey and I saw a moose while taking him to school.  If you follow me on facebook,  you probably saw my status message for that day.  I usually take the back roads when I drop him off at school which is about 8 miles from where we live.  One of the roads that I take runs parallel to I-90.  As we were rounding the corner I glanced over toward the interstate and on the other side I noticed this tall, lanky four legged animal running very clumsily.  I told Monkey to look over in that direction as I exclaimed, “Look, that is a moose!”  Through a process of elimination I came to that conclusion.  It had to have been a cow because no antlers were present.  But it definitely was not a dairy cow or cattle because the animal was much taller. It was running which I thought was strange, but it’s gait was not like a horses.  Therefore, it was a moose.

When I got home from taking Monkey to school I jumped on the Washington Department of Fish and Wildlife site and looked up moose.  It turns out that we do have moose here in Washington State and they are the most concentrated in Spokane county, right where I live.  I guess I did see a moose on Tuesday.
This morning while taking Monkey to school he couldn’t stop talking about the moose.  “What do moose eat, Mommy?” The curious little Monkey asked. “Grass and leaves mostly.” I replied.
“I like the way you take me to school better than Daddy.”
“Why is that? Is it because we see a lot of animals and wildlife?”
“Yes, Mommy.  We see moose and I see big, big hawks at school.  There was a big, big, big brown hawk at   school.”
“Hawks are cool.” I replied.  We have ferruginous hawks and red-tailed hawks out here.  Just last week Chris saw a ferruginous hawk dive bomb a white herring. The two birds were less than a mile away from our house. Our next door neighbors have pigeons.  Last October I witnessed a ferruginous hawk prey on one of their pigeons.  It was pretty exciting seeing him attack that bird and fly away with it.  Feathers were scattered all over the place. I felt bad for the pigeon, but the hawk has to eat too.

This week Chris has been out in Denver and he returns late this evening.  I always get stressed out and worried when he leaves to go out of town for a while.  Usually the kids misbehave and leave the house a mess.  So far I have been pleasantly surprised because the kids have been behaving this week.  I have been a little stricter this week, so maybe my strategy is working.

A few weeks ago I turned 35 but it feels more like 45 or 50.  I think on my 35th birthday I instantly turned into an old lady.  My energy level has decreased and I require a can of diet soda with caffeine at 2 in the afternoon just so I can make it past 6 pm.  I have the extra caffeine after I finish a pot of coffee all by myself.  I never thought that I would be able to finish a pot of coffee.  I must be turning into my mother.  Growing up I remember her drinking a whole pot of coffee by herself.  Now that I have five kids like she did, I understand why she needed all that caffeine.

Along with my lack of energy I have the worst old lady issue.  It is embarrassing, humiliating and really proves that I am getting old.  I can’t even sit down without getting a pain in my butt.  It hurts, it burns, and I am trying my best to resist the urge to scratch.  Yes, you’ve guessed it. I have the worst case of hemorrhoids.     Multiple pregnancies sure take a tole on your body.  Yesterday my bottom was also bleeding so bad it almost looked like I had my period.  I got some hemorrhoid cream but the tube says that you shouldn’t use it if you are bleeding.  But who follows labels anyway? For now I will just stand while I type this and maybe later  I’ll put an ice pack on my patootie.

I've Been Thinking . . .: Reflections, Prayers, and Meditations for a Meaningful Life

(918)
$11.46 (as of February 24, 2020 - More infoProduct prices and availability are accurate as of the date/time indicated and are subject to change. Any price and availability information displayed on [relevant Amazon Site(s), as applicable] at the time of purchase will apply to the purchase of this product.)

Where the Crawdads Sing

(37805)
(as of February 24, 2020 - More infoProduct prices and availability are accurate as of the date/time indicated and are subject to change. Any price and availability information displayed on [relevant Amazon Site(s), as applicable] at the time of purchase will apply to the purchase of this product.)