It’s been almost a year since I last updated this blog.  Now that I am making major changes to The Healthy Moms Magazine I might actually have more time to write here as well.  We’ll see. I can not make any promises.

Last night I had a very interesting conversation with Parrot.  Parrot is my very special little five-year-old boy with Autism Spectrum Disorder (ASD, formally Asperger’s).  He is extremely high-functioning and I believe he may have a genius IQ, although I haven’t had him tested yet. 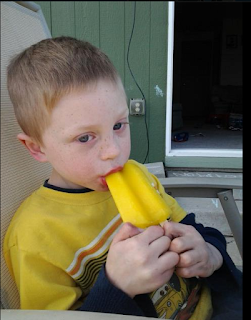 I heard him making noise in his bedroom shortly after 9pm last night, when he was supposed to be asleep. So, I went up to investigate.  Parrot stated that he could not get to sleep because he was worried that he would have a bad dream.  He said he needed me to stay up there with him to help him figure out what makes him happy so that he doesn’t have a bad dream.  We have used this strategy in the past when he couldn’t sleep.

I asked Parrot if school made him happy. He said, “I like Miss [teacher’s name] and my friend Chris.  I am just as smart as Chris but he is in second grade.  Miss [teacher’s name] only teaches grades Kindergarten, First and Second.  I do second grade math with Chris but I am bored and frustrated instead of being happy because I am too smart for second grade.”
Because he is considered special needs, Parrot is in the Special Education class as well as the regular Kindergarten.  They want to transition him into the mainstream classroom slowly.  Currently he is with his Kindergarten class for P.E, Music, and journal writing. Upon asking him if he likes being in the Kindergarten class he replied, “I am too smart for journal writing, P.E and music. I am not happy in [Kindergarten Teacher’s Name]’s class.”
So this is my dilemma.  As a parent I have no idea what I should do.  I want my child to be happy in school but I also want him to be able to learn the social skills that he needs in order to function in society. His special ed teacher wants him to learn how to socialize with his peers.  But I know that he needs to be in a higher grade level academically.
Tony Attwood, the world’s leading expert on Asperger’s when asked whether a child with Asperger’s should be placed in school based on their academic level, or their chronological level, states: “If he’s say, grade 4 chronologically, but grade 8 academically – it depends on the individual child obviously – but generally I would say to place them with the grade 8 kids. Many of the kids with AS aren’t there to socialize, they’re there to learn. And, one of the things that they hate is other kids disrupting the classroom. But watch out for grade 8 though, because the kids at that level want only to give their teachers a nervous breakdown. You’ve got to chose their teachers wisely. If you say that if they have got to be with their peer group, you’ve got to look at each case individually, but you need some flexibility. Actually, many of these kids have been home schooled, and gone on to university quite successfully. They don’t appear to have suffered from the lack of social interaction as teenagers.”

I don’t want to home school Parrot. I believe that I just have to work with the school district and see what they can do to meet his individual needs.  He is different than other kids his age and he knows it.

My kids are attending a brand new school in the fall.  I am hopeful that after an IEP meeting with his current special ed teacher (whom is going to be at the new school too) and the principal of the new school we can come up with an education plan that will challenge Parrot academically while offering the help he needs to socialize with other kids.  But I can see this as an ongoing struggle for him until he graduates high-school.

(12978)
(as of February 24, 2020 - More infoProduct prices and availability are accurate as of the date/time indicated and are subject to change. Any price and availability information displayed on [relevant Amazon Site(s), as applicable] at the time of purchase will apply to the purchase of this product.)

33 Days to Greater Glory: A Total Consecration to the Father Through Jesus Based on the Gospel of John

(2)
$14.75 (as of February 24, 2020 - More infoProduct prices and availability are accurate as of the date/time indicated and are subject to change. Any price and availability information displayed on [relevant Amazon Site(s), as applicable] at the time of purchase will apply to the purchase of this product.)

(57)
$14.44 (as of February 24, 2020 - More infoProduct prices and availability are accurate as of the date/time indicated and are subject to change. Any price and availability information displayed on [relevant Amazon Site(s), as applicable] at the time of purchase will apply to the purchase of this product.)

40 Days at the Foot of the Cross: A Gaze of Love from the Heart of Our Blessed Mother

(21)
$8.79 (as of February 24, 2020 - More infoProduct prices and availability are accurate as of the date/time indicated and are subject to change. Any price and availability information displayed on [relevant Amazon Site(s), as applicable] at the time of purchase will apply to the purchase of this product.)